The Medieval Origins of the Knights Templar

In the spring of 1095, the Byzantine Emperor Alexius Comnenus requested military assistance from Pope Urban II’s Council of Piacenza to help against attacks by the Seljuk Turks, and consequently, Europeans were banned by Muslims from making pilgrimages to Jerusalem. Later that year, Pope Urban II called for the first Crusade at the Council of Clermont to take back the Holy Land, and stayed in France helping to arrange for troops and supplies.

In 1096, Godfroi de Bouillon, Duke of Lower Lorraine, sold his castle and estates and left France as commander of the First Crusade. Among those who accompanied him was Hugues de Payens who was a co-founder of the Knights Templar and subsequently became the Order’s first Grand Master. Hugues de Payens aka Hugo de Paganis (b. Sept 1070 - d. May 1136) was a knight from the Champagne region of France. Hugo de Pedano, Montiniaci dominus is mentioned as a witness to a donation by Count Hugues de Champagne in a record dated to 1085-90, indicating that he was at least sixteen by that date and was considered a legal adult, able to bear witness to legal documents. His name appears on a number of other charters up to 1113 also relating to Count Hugues de Champagne. 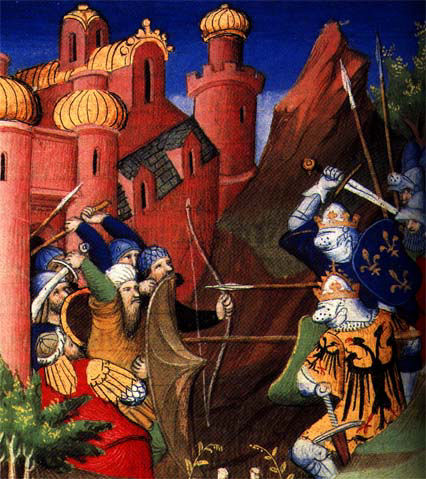 We know that all nine of the future Templars accompanied Bouillon on the First Crusade. After the Crusaders captured Nicea and Edessa, they moved on and eventually captured Jerusalem. By 1099, the Crusaders took Jerusalem, and Hugues de Payens then returned to France and became a vassal for Hugues Count of Champagne, one of the wealthiest lords in Europe. They later returned to the Holy Land. The Crusaders took Acre in 1104, and Hugues de Payens and the Count of Champagne made their first visit to the Temple Mount in Jerusalem. In 1108 they both returned to France. There are records of meetings among several related families while in France.

In the spring of 1112, Bernard de Fontaine left his home with many of his relatives to join Abbot Etienne (Stephen) Harding at the Cistercian monastery at Citeaux. Bernard would become an influential spiritual leader of the Cistercians, and later one of the most widely respected and influential men in the world. In 1115 Bernard founded a Cistercian monastery southeast of Bar-sur-Aube, calling it Claire Vallée , which evolved into Clairvaux. In 1128, Bernard assisted at the Council of Troyes at which he outlined the Rule of the Knights Templar. Bernard, who was canonized in 1174, was the nephew of Andre de Montbard, one of the original Templars. 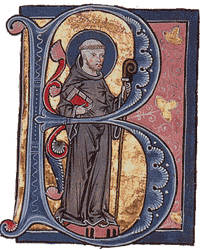 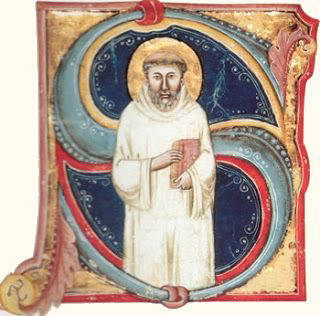 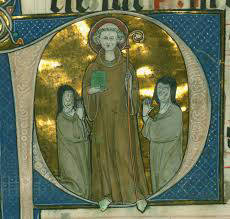 About the year 1114, the nine original members of the soon-to-be Templars left France for Jerusalem. According to Smart, there was a letter written to Count Hugues de Champagne from Bishop Ivo de Chartres in which he mentioned hearing the count had made a vow to join the Soldiers of Christ, indicating that when the nine knights left for Jerusalem, they were somewhat organised well before the Templar historian Guillaume de Tyre’s date of 1118. According to Smart, a chronicler of the Crusades, Michael the Syrian, Patriarch of the Syriac Church at Antioch, attested that Hugues de Payens was in Jerusalem for Hugues de Payens three years before founding the Templars. The Count of Champagne returned to France in 1115 to provide land and funding for the new Cictercian Abbey at Clairvaux. Hugues de Payens stayed behind in Jerusalem.

In March 1117, Baudouin I, King of Jerusalem, negotiated a constitution for the Knights Templar with Hugues de Payens and Godfroi de St. Omer. Hugues and others returned again to France. In 1118, Cistercian Abbot Prince Edouard of Serborga consecrated the nine original Templars in the presence of Bernard of Clairvaux and Count Hugues de Champagne. Soon after, the nine original members left Europe for Jerusalem, arriving in 1119, and Hugues de Payens became the first Grand Master of the Order. King Baudouin II gave the Templars the al-Aqsa mosque and the adjacent area called Solomon’s Stables on the Temple Mount for their headquarters. On Christmas Day, 1119, at the Church of the Holy Sepulchre, Templars took their monastic vows from Warmund of Picquigny, the Patriarch of Jerusalem. The next year in Jerusalem, Count Foulques V d’Anjou took an oath to join the Templars, and the year after (1121), he returned to Europe and granted the Templars a large endowment. By 1122, Pope Callistus II officially recognised the Sacred and Military Order of the Holy Sepulchre of Jerusalem – The Knights Templar.

The wife of Hugues Count of Champagne gave birth to a son in 1123 which the count did not believe was his. Two years later, he left his wife and son, and transferred his enormous assets (several times more than those of the King of France), to his nephew Thibaud, and travelled to Jerusalem to become a Templar. The count died in 1125. The Templar rolls expanded tremendously as did their various enterprises. They had protection and special dispensation from the pope and developed an elaborate banking system. And they also became powerful ambassadors, developing access and influence equal to that of the Pope. They eventually controlled more than 5,000 properties in Scotland, Ireland, Britain, France, Spain, the German states, Hungary and most countries on the Mediterranean. They financed 300 of the Church’s building plans, including cathedrals and monasteries. Count Thibaud de Champagne, the nephew of Hugues Count of Champagne, gave the Templars property in France, and Hugues de Payens donated his own properties to the Templars, his brother Edmund de Payens, inheriting the remaining family wealth. Many royals and nobles supported the Templars with gifts of land, supplies or financial assistance.

In April 1128, Hugues de Payens and Andre de Montbard visited the court of King Henry I of England who gave the Templars large gifts of property. Hugues set up a Templar preceptory at London. They also met with Scotland’s King David I, and, according to Smart, also set up a preceptory at Balantrodoch. The pair then travel to Flanders, and by May 1129, Hugues de Payens returned to Jerusalem with 300 newly recruited Templars. As mentioned earlier, it was also in 1128 that Bernard of Clairvaux gave his praise for the Templars with his De Laude Novae Militiae – In Praise of the New Knighthood. The following year, at the Council of Troyes, the Templars were granted their Rule of Order. The Templars, who were given quarters at the al Aqsa Mosque by King Baldwin, made the mosque their headquarters from their inception until the loss of Jerusalem in 1187. 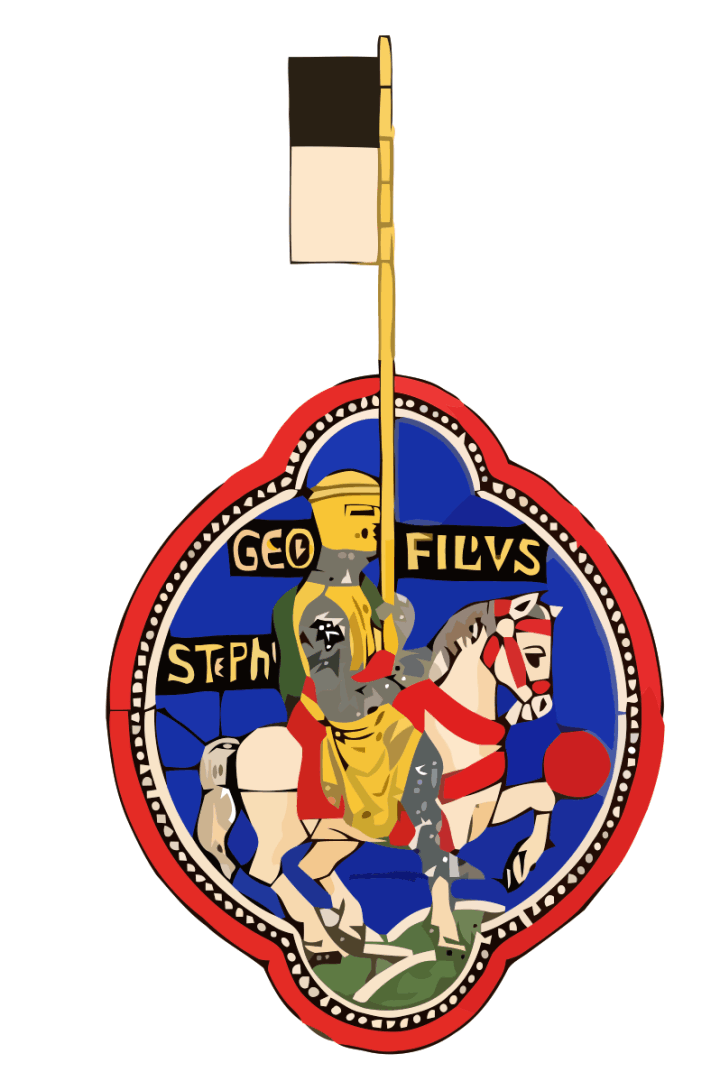 There were too many battles the Templars were involved in to list all of them, but following is a very partial list. They fought along with Crusaders throughout their tenure in the Holy Land, including the Battle of Azaz in 1125; the Siege of Damascus (although a failure) signalling the end of the Second Crusade in 1148; the Battle of Ascalon in 1153; Saladin’s defeat at the Battle of Montgisard; Saladin’s men defeated the Templars at the Springs of Cresson in 1187; and they were also defeated at the Battle of Hattin in July the same year. After nearly nine decades of Christian rule, Jerusalem surrendered to Saladin in October 1187. In 1189, led by Guy de Lusignan, the siege of Acre began and was eventually re-captured by Richard I and Philip of France nearly two years later. The Crusaders won the Battle of Arsuf in September 1191. Saladin died in 1193, and Richard I died in 1199.

In 1249, the Templars participated in the siege of Damietta which was captured by Louis VII of France. Because of their accumulated wealth, the Templars were able to provide part of the ransom of Louis IX who was captured at the Battle of Mansurah in 1250. In 1291, Acre fell to the Mamluks, and the Grand Master, William de Beaujeu, was killed in the battle. He was succeeded by Theobald Gaudin who was the Grand Master for only two years.

Jacques de Molay (b. 1244 - d. March 1314)In 1293, Jacques de Molay, who had joined the Templars in 1265, was elected as Master of the Order, and headed to Europe to secure more support for the Order. Pope Boniface VIII was crowned in 1293, which ceremony de Molay attended. Boniface was the last pope to support the Templars. In 1303, Philip IV of France, in concert with Boniface’s enemies, had Boniface arrested. Clement V then became the Pope in 1305. The following year, the Templars helped Amaury, the brother of Henry II, in securing the throne of Cyprus. That same year, 1306, Jacques de Molay and the Hospitaller Master were summoned to France by Clement V under the pretence of discussing prospects of a new Crusade and uniting the Orders.

On October 13, 1307, Philip IV gave the order for all Templars to be arrested. The following year Clement suspended the trails of the Templars, but later agreed to resume them under papal control, and the papal commission resumed its investigations of the Templars in 1309.

Henry II’s brother was assassinated in 1310, and Henry resumed the crown. He destroyed Templar property in retaliation for their assisting his brother. In 1312, Clement dissolved the Order in the papal bull Vox in excelso, and transferred Templar property to the Hospitallers in the bull Ad providam.

Jacques de Molay was executed by Philip on March 18, 1314 but not before he had time to transfer the Grand Mastership of the Order over to another successor. 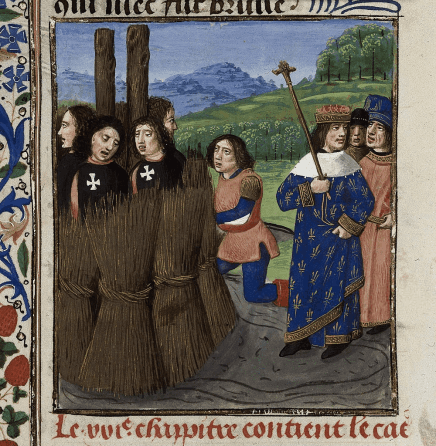